21st Century Incubator - How It's Made

In the previous post, I gave an intro to what an incubator is and why we need a 21st century version. Check it out if you haven't yet: 21st Century Incubator - Part 1 - Intro

In this part, we will go over how this incubator is made and what are it's unique elements 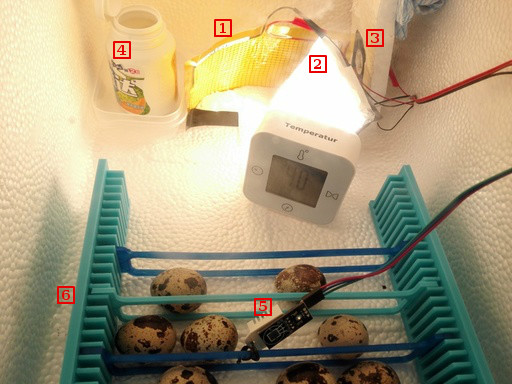 The inside of the incubator is surprisingly very standard. There have been dozens of guides on creating an incubator and most, if not all have the same setup.

Used as a heat source. This was supposed to be enough warmth for the incubator, however it fell short, so a secondary heating source was also needed when temperature needs to increase quicker.

These get very hot and are able to increase the temperature inside the box to 37.5 °C in a matter of minutes.

The fan is used to circulate the air throughout the box so that temperatures are roughly the same at all points in the incubator.

High accuracy temperature and humidity sensor. It can read temperature with an accuracy of +/- 0.1 °C. For a steady incubation temperature, the sensor's accuracy is crucial as it determines how quickly the heating can react to temperature changes.

This consists of a tray that can be separated into partitions using the dividers. The tray sits between 2 guide lines and a motor attached to the head of tray moves the tray forward and backward every hour. Eggs confined within the divided space roll.

The rest of the monstrosity

What I'm using here is a prototype board, which facilitates the connections between the different components.

Outside is more interesting 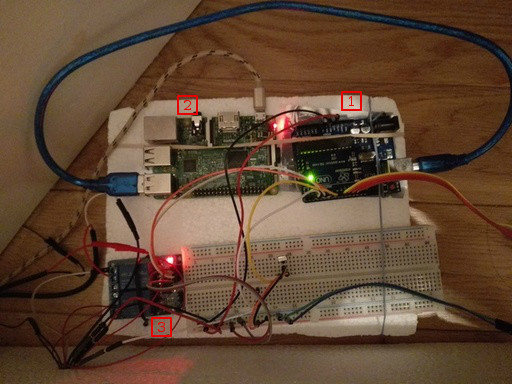 The main controller of the incubator. This is an open source hardware and software bundle that has the majority of the elements you would need for any electronics project onboard.

The main purpose of the Arduino is to periodically collect information from the sensor and decide what to do with the heating elements (pad and light). It also moves the tray via the motor once per hour.

Similar to an Arduino but this can be a full computer if needed. Unlike the Arduino, it comes with a WiFi chip, usb and HDMI ports.

The Raspberry Pi is connected to the Arduino via the serial line.

Why do we need another device when the Arduino is there?

A relay is a mechanical switch that can be turned on and off from the hosting device (Arduino). This is used as a mechanism for turning on and off the heating elements to control the temperature.

The relay is needed because the Arduino is not able to run high power devices such as the heating pad and bulb by itself hence they need to be connected to separate power supplies and switched off board.

I know what you are thinking right now. "This is the exact same as my <brand> incubator. What's the deal smart ass?"

The Arduino has a microprocessor which can be programmed to control many inputs and outputs.

While what has been demonstrated so far is standard functionality, the potential with what can be added on top is immense. Here's just a few examples of what I have managed to add on so far:

With a little effort, the following could be added as well:

By far the most useful and interesting feature is that all information regarding the incubator is stored online and can be queried in real time. The next part is dedicated to this so read on to Part 3 - Monitoring and Alerts.